Just finished with listening to this audiobook, and it was so amazing that I wanted to share it here in my blog. 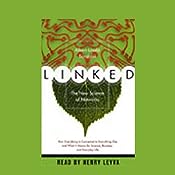 Drawn by my interest on Networks (no, I don’t mean the computer networks here) and the science behind it, just decided to give a this book a try, and I was amazed on all the sorts of networks mentioned in this book and how they relate to each other. From holywood networks, going through the Internet, Social Networks and Gene and Protein Networks and closing up the book with Terrorists Networks, this book is a must read for whoever cares about how things relate to each other, what’s the science behind it, what is a network hub, how to build or destroy (if possible) a network and how to recognize one.

You’ll end up figuring that networks are more present in our lives than we think, and how to take benefit of the natural manner in which things relates to each other.

PS: Interesting detail at the end of the book, when the author mentions that al-Qaeda its a scale-free network, and that there are no main hubs that if killed could dismantle the organization. He even mentions Osama Bin Laden, in a hypothetical analysis of what would happen if he were killed… Yes, you guessed it: Nothing. al-Qaeda would just continue with their terror business through their network of ever growing terrorist jihadists.